What are the deepest positions in the 2021 NFL Draft?

What are the deepest positions in the 2021 NFL Draft?

The LA Rams, like every other NFL team, enters the NFL offseason with a shopping list of positions to restock on the team's roster. The problem is that the...

ramblinfan.com
What are the deepest positions in the 2021 NFL Draft?

The LA Rams, like every other NFL team, enters the NFL offseason with a shopping list of positions to restock on the team’s roster. The problem is that the NCAA does not produce seniors likely to hear their names called in the NFL Draft each year to order. Colleges nationwide recruit their own recruits from high schools nationwide based on their own team’s needs.

So that level of talent and skill set that arrives hopeful to each year’s draft class is not generated by the expected needs of NFL teams but is rather random in nature. The NFL teams themselves own a bit of the responsibility, as teams create their own NFL Draft shopping list on the positions that they were either unable to address the previous year, or unable to afford to retain in the current year.

So it’s a bit of a mish-mash. An unreliable supply of talent hoping to fill the unpredictable needs of talent. Thankfully NFL teams keep one eye trained on the future and have a sense of what their own team may need then, and what the NFL Draft will deliver in the future.

That’s why the LA Rams were so strongly committed to retaining three defensive linemen who were signed after the 2020 NFL Draft. This year’s crop of defensive linemen is thin indeed. That raises the question, which positions are the deepest in the 2021 NFL Draft? If you recall, the 2020 NFL Draft was particularly deep in wide receivers, defensive backs, running backs, and there was an unusually high number of top-tier offensive tackles.

We tackled the topic before, using both our own draft expert John Vogel’s Big Board as well as The Draft Network’s own big board. You can find those results in this article. But time passes, scouting reports are updated, so what changes have occurred? Well, revisiting The Draft Network’s prospect ranking shows a shift of sorts: 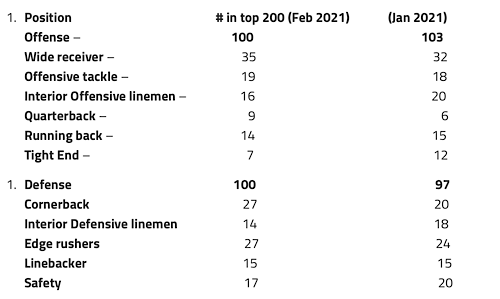 Using this information, we can see that the two areas that the LA Rams chose to address in the 2020 NFL Draft that generated mild confusion – tight end and safety – are two positions that are very light indeed in the 2021 NFL Draft. Meanwhile, some areas of need such as linebacker, cornerback, Edge rushers, and offensive tackles seem to be in ample supply. Of course, each NFL team has scouted prospects and has their own ‘Big Board’ of players who they feel are valued for their perceived fit.

But wouldn’t it be nice to get a second opinion? Thanks to Yahoo Sports Eric Edholm, we have a sense of the deep positions and the shallow ones. Let’s see how we line up. According to Yahoo Sports, the 2021 NFL Draft’s strongest to weakest positions are as follows:

We only seem to disagree on the quarterback position. Our analysis has cornerbacks much deeper than offensive tackles. But overall, they are similar enough to reinforce our conclusions. So what positions will the LA Rams target in the 2021 NFL Draft?

They have followed a pattern of using the following year’s projected free agents as a template in the past. So that would place the following positions in the sights of the LA Rams this year:

Of course, the LA Rams do not have 16 NFL draft picks, so they’ll need to narrow the search. The Rams seem to need a center. linebacker, and Edge rusher in this draft. If an offensive tackle drops to them, that would be a very wise investment.

What do you see as needs for the Rams in the 2021 NFL Draft? Will six picks be enough? Or are you hoping that the Rams trade back or trade players for more picks in the draft this year?
Show hidden low quality content
You must log in or register to reply here.
Share:
Reddit Pinterest Tumblr WhatsApp Email Link
Top Bottom