I saw on another team board they organize pregame talk this way. Also, good way to get talk going for this big game! 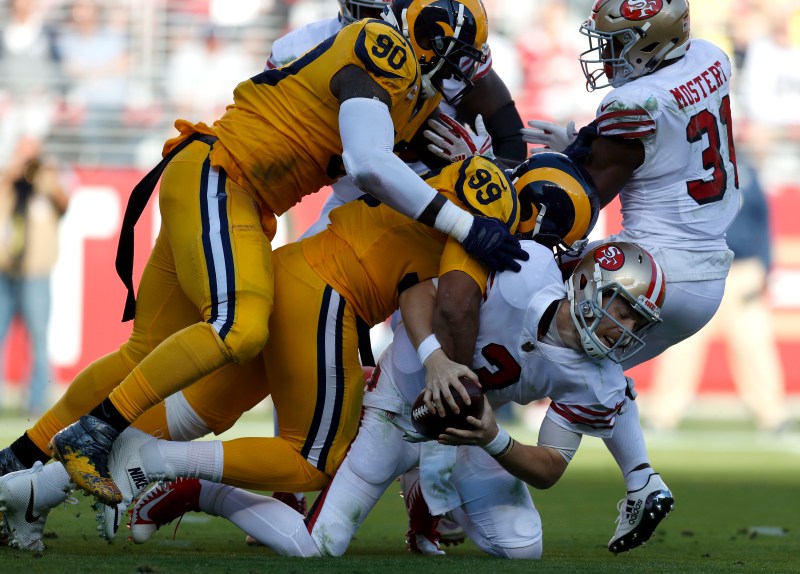 The game is live on Sky for us over in Blighty. I don’t know many 49er supporters but the ones I do are really getting mouthy. We need to put them back in there place.
Reactions: LARAMSinFeb., Ramrocket, Ram65 and 11 others

I was definitely rooting for the Browns last night... but at 4-0... beating the 49’ers will feel THAT much better... Giving them their first loss... 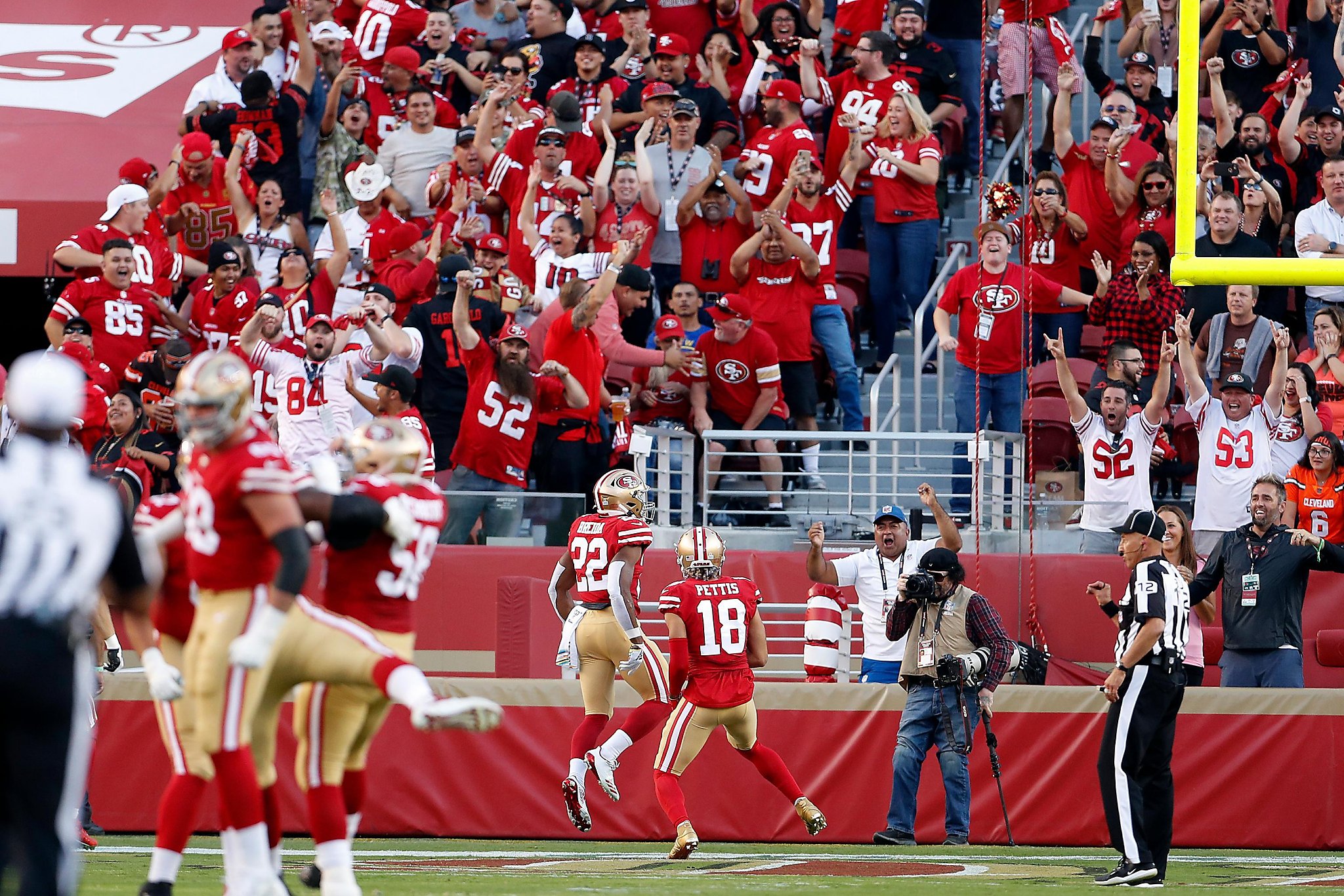 49ers' undefeated start: Can they keep this up?

The San Francisco 49ers beat the Cleveland Browns 31-3 Monday night, bringing the team to a 4-0 record and raising expectations.

www.sfchronicle.com
49ers’ undefeated start: Can they keep this up?

The last time the 49ers started a season 4-0, a guy named Joe was at quarterback, a dude named Jerry lined up at wide receiver and a dynasty was in full swing.

“It’s awesome but like coach Shanahan said, ‘All we’re guaranteed is to go 4-12,’” George Kittle said.

The 49ers continued their undefeated season on Monday night, jumping on the much-hyped Cleveland Browns early in the game and never letting up, winning 31-3. The game evoked history (the 49ers dynasty) and revenge (Nick Bosa sacking Baker Mayfield and then planting his imaginary flag over his collegiate foe), and had to open eyes around the league to the 49ers. They join the defending Super Bowl champion Patriots as the only undefeated teams.

“We have to handle it the same way we handle 0-5: don’t pay attention and just go to work,” Kyle Shanahan said.

The win allows the 49ers to retain sole possession of first place in the NFC West, ahead of Seattle (4-1) and the reigning NFC champions, the Rams (3-2). It sets up an epic early-season contest against Sean McVay’s team in Los Angeles on Sunday.

With the victory, the 49ers matched their entire win total from last season. The last time the 49ers ripped off four straight wins was in 1990, when they were coming off consecutive Super Bowl championships and aiming toward a three-peat dream that only ended with a fumble in the NFC title game. The win streak that season stretched to 10 before there was a loss.

“It’s a pretty cool stat, and you have to appreciate the history of this franchise,” Richard Sherman said.

So far, these are the “Yeah, but” 49ers. Yeah, they’re undefeated, but look who they’ve played. Yeah, they look good now, but that second-half schedule is a lot more difficult.

But with each win, the “yeah, buts” are fading. It is hard to win in the NFL. Hard to win on the road. Hard to win on Monday night when you’re not used to the eyes of the league on you. Hard to turn around the freighter of a losing NFL franchise.

“They beat us in every phase of the game,” Odell Beckham Jr. said. “They just did everything.”

So the 49ers need offer no apologies.

“We don’t worry about it,” Sherman said. “I want the idiots to sound like idiots the whole year.”

And if their fans aren’t on board yet, they may want to hop up.

With an undefeated home team playing in a national game against the 2019 preseason sweetheart pick, this was perhaps the most anticipated 49ers game ever at Levi’s Stadium. While the crowd was loud and excited, many seats in the upper decks and the 50-yard line club seats remained empty. It was a nice crowd, but the Clemson-Alabama college championship game remains undefeated in Levi’s game rankings, not only for the fans’ enthusiasm but their ability to stay out of the swanky club areas.

This 49ers team has a lot going for it and adding an intimidating atmosphere to the mix would be even more special.

The 49ers have a fast and powerful defense that came into the game ranked third in the league. They are getting turnovers and getting to the quarterback. Monday was a nightmare for Mayfield, who was on the bench at the end of the game.

On offense, the 49ers are punishing teams with the rushing game, which is about as ideal a scenario as Shanahan could ask for, with quarterback Garoppolo coming off a torn ACL.

And they have one of the best young coaches in the game. Shanahan has the running game clicking, dialing up the right plays at the right time, keeping the opponents off balance. His calm, focused demeanor rubs off on the team.

This season could still go off the rails, though it’s getting harder and harder to envision that. But the second half of the schedule is, indeed, much more difficult.

Still, the 49ers have a running start, and October dates with both 0-5 Washington, which replaced head coach Jay Gruden on Monday with the well-worn Bill Callahan, and Arizona, which has only won one game.

And what they really have, which they lacked for most of the past five seasons, is confidence.

“This isn’t a fluke,” Sherman said.

There’s a forward momentum that this franchise has lacked — save for three seasons under Jim Harbaugh — since the dynasty years. And they have the start to prove it.
Reactions: LARAMSinFeb.

Barring Superman Donald showing up for a career game, we are about to get roasted folks.

Niners are hitting on all cylinders and our offensive timing belt is still off.

Maybe wade can pull a rabbit out of his butt this week
Reactions: SanAnRam, Ramhusker, Corbin and 9 others

TexasRam said:
Barring Superman Donald showing up for a career game, we are about to get roasted folks.

Niners are hitting on all cylinders and our offensive timing belt is still off.

Maybe wade can pull a rabbit out of his butt this week
Click to expand...

Yeah the Niners look like a better team right now overall. This might be a L for us.

But I'm not gonna sweat it too much. What really matters is getting into the playoffs first off, and from there has your roster grown enough to give you a chance. Rams are not an elite team right now. But they have potential to become a better team than they were. Hoping for a big divisional win here of course but if not as dim as things will look there will still be many rounds left in this season-long bout.

What's really cool is to see a divisional game that means so much early in the season. IMO this is one of the league's most underrated rivalries and it should be a hell of a game.
Reactions: nighttrain

This kind of stuff never gets old ... 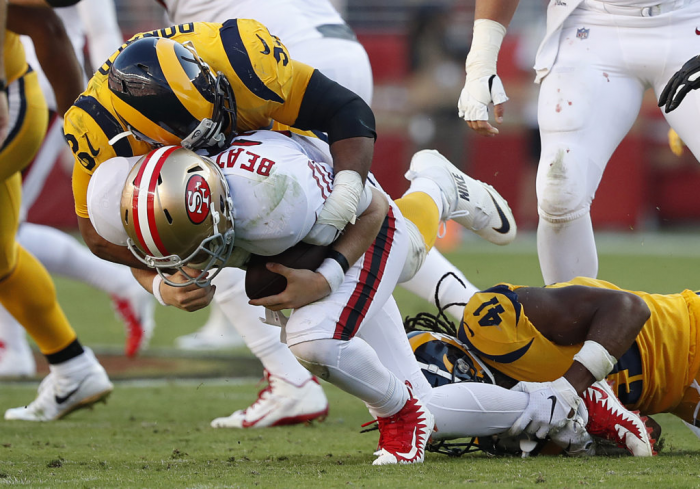 the division is gonna be a dog fight....rivalries gonna get even bigger after this year....
Reactions: Soul Surfer and rking4441

Losing this game would be a huge problem. We’d be 3 games behind the Niners in the loss column, and would have to beat them in SF late in the season to have any chance at the division. If we lose next Sunday, we most likely will be fighting for a WC.

To me, the big issue is their defensive front, they are loaded with 1st round talent and those boys are huge. They got guys that are 6’7” who will be slapping little guys like Allen and Blythe around.

McVay and Kromer will need to perform a magic act to keep Goff upright.

I think this is where we find out the wisdom of having the cheapest interior OL in the league.
Reactions: IBruce80 and LARAMSinFeb.

max said:
I think this is where we find out the wisdom of having the cheapest interior OL in the league.
Click to expand...

I concur Max and I too fear that 49er front. Their pass rush is relentless now is a good time for the Ram offensive line to showcase growth. Multiple double TE sets will help, but this is a huge challenge on both sides of the ball.

I bet next year Max, there is high draft capital spent on the Offensive Line.
Reactions: IBruce80, LARAMSinFeb. and RamsFanCK

The Niners have my respect. They are a physical bunch who are gonna challenge out ability to tackle. Another Dog Fight on deck.

That being said. The Niners have beat the Bucs, Bengals, Steelers with Rudolph, and the Browns. They’ve had a warm up schedule the first few weeks. We will be their first true test.
Reactions: Oldgeek, KayJay, Liberator and 3 others

Have the Horns taken the '9ers out to the woodshed yet?
Reactions: RamBall

den-the-coach said:
I concur Max and I too fear that 49er front. Their pass rush is relentless now is a good time for the Ram offensive line to showcase growth. Multiple double TE sets will help, but this is a huge challenge on both sides of the ball.

I bet next year Max, there is high draft capital spent on the Offensive Line.
Click to expand...

If the Niners beat us badly up front, very possible, I think it will be a coming to Jesus moment for McVay. I think he’s been following Snead and Kromer on building the OL with JAG talent like Allen and Blythe up til now. If he gets his offense dismantled because of the OL, he’s gonna step in and demand more talent up front.

This game is huge for Kromer's clout in the org. These are his guys.
Reactions: IBruce80, LARAMSinFeb., Oldgeek and 4 others

Based on the Rams D I've seen the last two weeks I'm not real hopeful.

max said:
This game is huge for Kromer's clout in the org. These are his guys.
Click to expand...

And with Bill Callahan looming as being available come 2020 even more so IMHO.